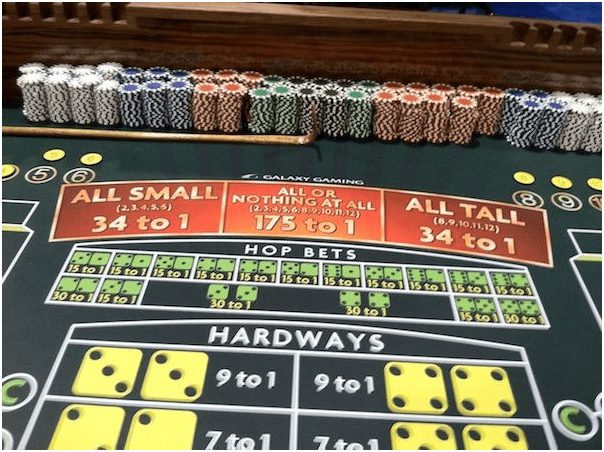 In the game of craps as there are many bets  and the gamers who make the the Pass Line Bet have a chance to lower the house edge by making “taking the odds” or making the “free odds” bet. This is called free odds because the wager has a 0% house edge. It still costs money to make the wager. In fact, it is usually a 3x to 5x increase of the original bet. This lowers the overall house edge, depending on the size bet you make.

Because this is such a good betting proposition for you, the casino limits the amount you can bet on this option. The increase varies from one casino to another, but it tends to be anywhere from 3x to 100x You will see a table with a sign that says 3x-4x-5x is indicating those are the max bets when making the free odds bet.

The fact that Free Odds bet does not feature any house advantage makes craps experts recommend players to make it every time when available, as it is considered a relatively easy way for them to generate big winnings. The Free Odds bet is probably the most powerful one in the game of craps. This type of wager, however, could not be used freely. Players are required to have placed a Pass/Don’t Pass bet or a Come/Don’t Come bet in order to take advantage of the Free Odds bet.

The working of Free Odds Bet

As already mentioned above, the Free Odds bet is required to be used in conjunction with another bet. If any of the “craps numbers” (2, 3 or 12) is rolled by the shooter, then a point number (4, 5, 6, 8, 9 or 10) must be established. The same also applies in case that a 7 or an 11 comes out. Once the point is established, players are provided with the chance to access the Pass/Don’t Pass or Come/Don’t Come bets.

Players must remember that they are allowed to place a wager on the Free Odds bet in multiples of their initial bet amount used in the flat bet. Most casinos feature multiples of 1x, 2x or 3x, but there are some casinos that allow players to place wagers that are 10, 50 and even 100 times bigger in comparison to the original odds bets. Normally, the larger the wager on the Odds bet, the lower the house advantage is.

The odds bet wins when the point number comes out before a 7 is rolled by the shooter. Players, however, should bear in mind that the number 7 is the most frequently rolled number, followed by 6 and 8. Then, there are 9 and 5, and 4 and 10 that are the least frequent of the point numbers.

The odds on Pass Line Bet 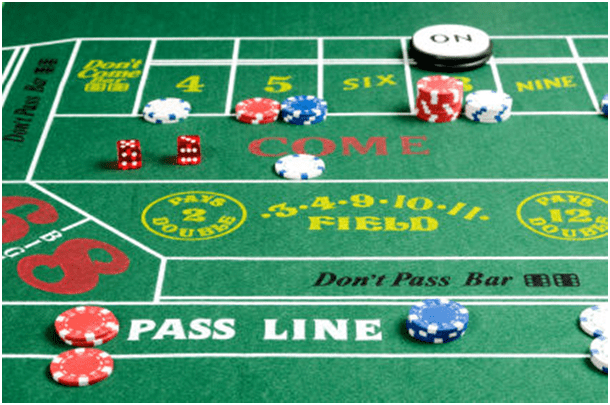 Players are allowed to “take odds” when they have made a Pass Line bet. The Odds bet can be used whenever there is a point and represents the player’s belief that the shooter will make his point. The payout depends on the player’s point for the pass line bet.

When taking the odds on a Pass Line bet, the player needs to put their check right behind the Pass Line bet. In addition, the Free Odds bet can be increased, decreased or removed at any time when there is a point for the pass line.

When choosing the Don’t Pass bet, the player bets against the numbers 7 and 11, and is considered being at a disadvantage, as there is a total of eight combinations of these numbers that could cause the don’t pass bet to lose. At the same time, there are only three combinations of 2 or 3 that could help them win. This, however, changes once the shooter has established a point.

When a point is established, the advantage passes to the player who has chosen the Don’t Pass bet, so they must “lay” odds in case they want to bet more money on the probability that the shooter would not make their point.

You can take advantage of the Free Odds bet in cases when you have originally used a Come bet. So, in cases of Come bets, players take odds in a way that is very much alike taking odds on Pass Line bets. However, there is one major difference, which is such bets are not self-service ones, which means that communication between the dealer and the player will be required.

In addition, players should be aware of the fact that odds taken on Come bets are automatically off when it comes to the come-out roll.

Laying Odds on Don’t Come bets looks almost exactly like laying the odds on Don’t Pass bets, but they are not self-service bets, too. In case they would like to Lay odds on their Don’t Come bet, players will need the assistance of the dealer.

You are also allowed to make changes to their bet, by increasing, decreasing or removing it. In order to do such a thing, they would have to communicate with the dealer once again and tell them what to do.

Now that you have understood about the free odds bet, the Free Odds exponential betting is basically a Pass/Come strategy designed to be played on 20X – 100X odds games  with a Free Odds progressive betting schedule attached. There are certain rules to follow when playing a Free Odds Exponential Betting Strategy in the game of Craps as explained by dice control and betting strategies for casino Craps.