Skip to content
Home » Articles » How to shoot and control the dice in the game of craps? 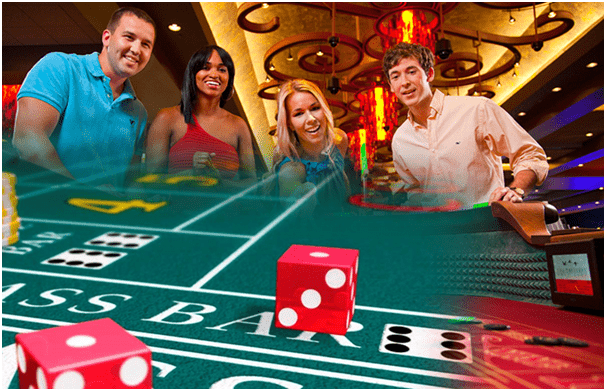 Often you have seen at the movies or TV ads how a player shakes the dice thoroughly and throws it down the craps table  and the dice rolls over the craps table but just to lose. Purely shaking the dice randomly didn’t get you any wins but you are pumping cash to the casino cashier box and emptying your wallet. So only way to beat craps is to shoot the dice properly and have dice control. Obviously, no one can control the outcome of the dice on every single roll but with consistency and practice one gets the control. Before you know how to control the dice first study the dice.

There are 36 combinations that can be made from of a pair of dice. There are six ways that a seven can be made. This means that with a random roll the mathematical probability of a seven appearing will be once in every six rolls, which is a Sevens to Rolls Ratio (SRR) of 6. The house edge is calculated with this ratio.

If you throw the dice 42 times and roll seven 7’s, you have a Sevens to Rolls Ratio of 6.

(42/7 = 6) If, however, you have one non-random roll and throw seven 7’s in 43 rolls you have an SRR of 6.14 this is enough to negate the house edge on the 6 and 8 place bets. Just one controlled throw out of every 43 rolls of the dice would eliminate the house edge and yield a break-even game.

According to Bill Burton instructor for Golden Touch Craps, a company that teaches dice control seminars contributed to the book Golden Touch Dice Control Revolution, the controlled throwing consists of several components. How you set the dice can affect their outcome. One of the most popular sets is the 3-Vm where you have threes in a “V” formation. This gives you the hard six (3 and 3) on top, the six, (5 and 1) on the front, the eight on one (6 and 2) on the back and the Hard eight (4 and 4) on the bottom. There are no sevens showing on the dice with this set.

After setting the dice you must use a smooth delivery that is strong enough to get the dice to the end of the table but without too much force that will cause them to bounce hard against the back of the table. You also want to make sure that you follow through with your throw. You want to practice so you are throwing the dice the same way each time. Your goal is to throw numbers while avoiding the seven. Throwing the same way can produce repeating numbers.

Like any thing that you have learnt since childhood the controlled throwing of dice is a physical skill which requires hours of practice to master. It is not easy and some players who try never master it. Perfecting a controlled throw is not enough to guarantee you winning sessions at the craps table. You will also need to learn how to bet properly to take advantage of your edge.

Learn Dice Setting and choose one set to start with. Keep the dice square on the table, parallel to, and facing the backwall Before tossing the dice, visually choose a spot a few inches from the backwall to land your dice on.  From now on, you’ll do everything you can to hit that spot as often as you can Gently toss the dice, as if trying to “swish” a basketball through a hoop. When you’re hand is 3/4 through the toss, spring open your hand – letting go of the dice Make sure the dice are level in the air – not twisting around in weird directions Spinning backward or forward is fine. Try to keep the dice looking as if they were glued together in the air. Observe how the dice land, react to the backwall, and how much they keep rolling after touching the backwall.
Take a mental note of what the dice show when they come to a stop. If you’re noticing that the dice are now rolling a certain combination more often – you’re on your way

Keep in mind that if you roll a 6 twice in a row – it means little if one combination was 4+2 and the second one was 5+1. Just keep adjusting your throw to make sure the dice land softly on target, lightly touch the backwall, and comes to a complete stop as quickly as possible withno bouncing around all over the craps table.